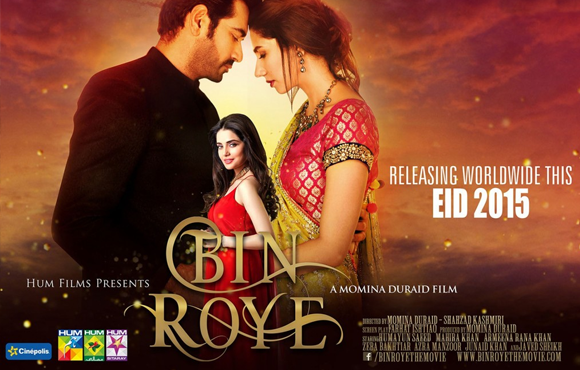 So yesterday, I finally managed to get hold of a couple of tickets to the ever elusive Bin Roye. I must say it was all I was expecting it to be and then more. To begin with, all I had read and heard were awful reviews and yes you may say that maybe I wasn’t reading from the right places and wasn’t hearing the reviews from the right people, but never the less, what I heard was pretty disappointing and yet I had a very firm belief in the overall movie. Before I move onto the actual review, I would like to point out that the things that attracted me to the movie were primarily, the star cast. I must not fail to mention here that I have always liked seeing Humayun Saeed’s acting and I have been following Mahira’s career expansion over the past few years with much appreciation. I have seen enough films and dramas to judge for myself when a certain couple with hit it off on the big screen and needless to say, the lead couple did not disappoint me at all. Another thing that attracted me to the movie was the sound track. I had only heard two songs “Tere Bina Jeena” sung by none other than the great Rahat Fateh Ali and the other one was the surprisingly well choreographed mehndi number “Ballay Ballay”. Lastly, I could see that our culture, at least to a reasonably good extent, was portrayed in the movie starting from the clothing, the chorian, the ambiance and what not! To me, it was a must see and so it happened.

Now coming to the review I am going to start off with the critique and the good stuff will follow. In my humble opinion, the film felt like it was purposefully cut in half. The entire time, the sequences jumped from one scene to another and there was a very evident lack of coherence. Do not misunderstand me, the story line was absolutely clear but still, as a whole, there was a feeling of disconnect during the whole time. It could have been more in flow, if you know what I mean, which you would if you have seen the film. Secondly, the story was a bit too predictable. Now before you lose all hope, which you shouldn’t, let me move onto the good stuff.

Yes the movie did seem like it was cut short but trust me, there is no boring waiting period in the movie and it does move from one climax to another which, if I may say so myself, does keep you at the edge of your seat and might I also add, very entertained. The movie lasted a total of two hours, which I think is absolutely amazing since me and my mom had tickets for the 11 PM show and it wasn’t even a weekend night. And so before we knew it, we were done and we loved it! The next amazing thing about the movie is the lightness of the characters, their absolutely natural state of being with makeup being as little as possible. Now I do not endorse that lack of makeup has anything to do with the success of the movie but let me say that the two ladies, Mahira and Armeena, barely needed and they were such a treat to watch on the big screen. Also, the chemistry between the lead couple did not hurt one little bit.

We now move onto the acting part of the movie and let me start by saying that after watching the drama “Mohabbat ab Nahin Hogi” I absolutely did not have high hopes from Armeena Khan at all. We all know how being portrayed in a negative role would do that to an actor’s image. But I must compliment that she looks absolutely adorable in the movie, as small as her role might be. She was the perfect counterpart to Mahira so kudos to her. As for Mahira and Humayun, they literally were a class apart. Humayun played the role of a macho man with all the sincerity he could muster and delivered quite the performance. And Mahira, oh Mahira, she looked so petite and tiny and cute and what not! I bet she gained millions and millions of fans just by being her and many were able to see the sweet subtle side of Mahira from her “Humsafar” days.

Moving on to the sets, the clothes and the whole ambiance, needless to say, it was amazing. Generally, costumes in movies literally leave you wanting but in this movie, you could really relate too. The costumes worn by Mahira did at times seem a little outdated what with the shorts shirts and printed baggy trousers aka patiala shalwars, but boy did she make it work. Apart from the designer dresses for all the wedding outfits, the remaining clothes were very wearable and accessible.

Momina Duraid and team deserve a round of applause and we so look forward to more amazing projects. As for the bottom line, if you are into cliche’ type cheesy movies with just the right dose of romance, drama and tears, you are in for quite the joy ride.