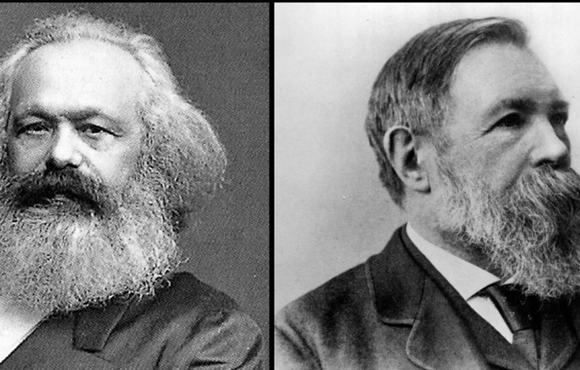 The Communist Manifesto, one of the most important political manuscripts in the world, was written by Karl Marx and Friedrich Engels. After being exiled from Paris in 1846 due to strong politics, Marx went to Belgium where he organized others like himself, some German artisans, to form a political organization by the name of German Working Men’s Association. In 1847, this organization and similar organizations operating in England were called together for a meeting by Marx and together these organizations formed “The Communist League”. The main purpose of this alliance was to address their grievances towards Capitalism and where many believed in universal brotherhood, Marx started preaching the “fiery rhetoric” of class warfare, implying that a revolution was underway as it should be. The league, undoubtedly taken by his words, commissioned him to write a statement of their collective problems. A statement that opened with the lines “ A spectre is haunting Europe – the spectre of Communism”, with its foundation evolving from the proposition that history of all hitherto existing society is the history of class struggles and finally, ending at a stirring cry, “Working men of all countries, unite! “ This statement then became known as “The Communist Manifesto”.

As enunciated above, the Communist Manifesto, opens up with the line “The history of hitherto societies has been the history of class struggles” and this is the proposition that has been defended throughout the document. Marx emphasized on the claim that all men were born free but societies evolved to such a state that most of them are in chains. To reach this conclusion and to somehow propose a solution, the manifesto is systematically divided into four sections.

The first section, titled “Bourgeois and Proletarians”, deals with two primary classes, the Bourgeois and the Proletariats. Marx emphasizes on the historical development of societies in such a way so as to evolve to a point where there is a dominant “ruling class” known as the Bourgeois. Marx and Engels put forth this notion that forever, in various roles, the Bourgeois have been exploiting the Proletariats (the working class). They enunciated various roles for example “freeman and slave”, “patrician and plebian”, “lord and serf” or in short, the governors and the governed. They introduced the idea that all the surplus, the profit that goes to the capitalist ruling classes, the dominant minority, is actually the true right of the lower strata of the society, the working class.

The second section titled “Proletariats and Communists”, deals with a proper introduction of this working class that they keep referring too, the Proletarians. If viewed with an open mind, this section seems to be focused on a state of Utopia, if we may, where immense struggle and violence would eventually lead to coup d’etat by the working class thereby relieving the bourgeois from their power and their ownership of the means of production. Defeat of capitalism, Marx asserts, is the only real way to move forwards.

The third and fourth sections titled “Socialist and Communist Literature” and “Position of the communists in Relation to the Various Opposition Parties” respectively; deal with how Marx’s proposed struggle is different from previous/contemporary socialist movements. He sheds light on the flaws of previous movements in three different ways, one on how they look to previous modes of social organization to find a solution for present problems, secondly the denial of the class conflict and lastly, their failure to recognize that a violent revolution is the only logical final act. “Let the ruling classes tremble at a Communistic Revolution” he says, “Working men of all countries, unite”, he thunders.

The Manifesto has indeed lived an illustrious life and that is saying something when talking about something that is too long to be a concise declaration of principles and too short to be a book. It has had an immensely influential impact on the political history of the world in the past 150 years. At its best, it inspired communist political systems in half the countries over the world and while there are other more elaborate works from Marx, none matches the uniqueness of The Communist Manifesto. The book, if we might call a collection of 23 pages that, is certainly vague and therefore, leaves room for various interpretations and such has truly been the case. For example, the document mentions nothing of a future after, for example, a proletarian revolution. An answer to such a question, keeping in mind all that has been said in the manifesto, would be vague at the very least simply because Marx has essentially undervalued non-economic forces. On the same lines, some critics even go on to say that Marx has enveloped his beliefs in an economic shell and has done so at the expense of non-economic issues. Furthermore, the concepts and ideas presented by Marx are based on a society that is industrial in nature like Germany and England so how they would fare in a society that is primarily agricultural, is again, difficult to understand. At the base of all the criticism, there is widespread confusion as to what Marx actually wanted, a question that can at best be answered by the ten points by Marx which were launched in a newspaper during the swirl of revolutions in 1848.