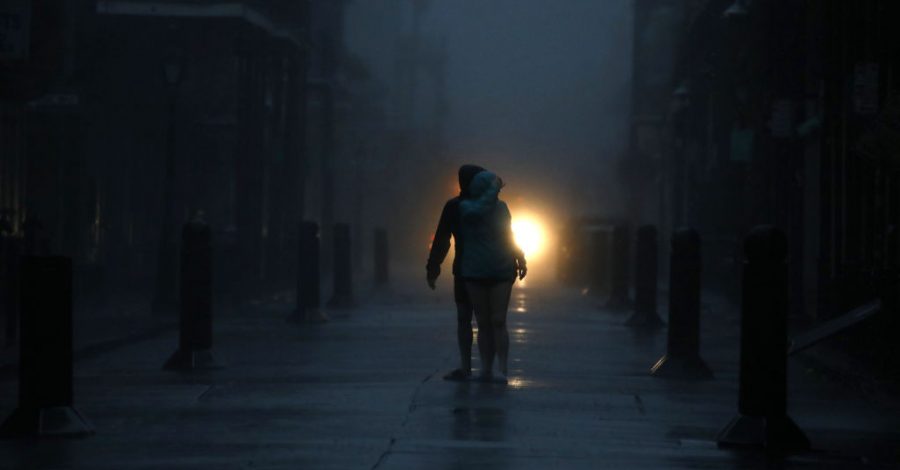 August 29, 2021, the entire state of Louisiana seemed to be experiencing some form of PTSD as they prepared to brave the impact ahead of Hurricane Ida. For those who do not know, 16 years ago precisely on August 29, 2005, Hurricane Katrina made landfall near New Orleans as a Category 5 Atlantic hurricane that caused 1,800 deaths and $125 billion in damage (Wikipedia). Hurricane Ida made landfall in the gulf coast of Louisiana as a Category 4 storm on the exact data, 16 years later, and is the sixth costliest tropical cyclone ever recorded (Wikipedia). The storm force winds knocked out Entergy’s biggest tower that supplies power to entire New Orleans and part of the Jefferson Parish. With its transmission lines ending up in the Mississippi River, the fallen tower caused a wide-spread complete black out in the city of New Orleans and surrounding areas. A black out in this day and age is testament to the ferocity of the hurricane, the first one I have ever witnessed in my life. Since the hurricane traveled by land all the way to New York causing historically rare weather conditions in the east, this has all become international news. So why am I writing about it?

The primary purpose for which I intended to write this article was to illustrate the manner and discipline with which my university and the city government handled the situation pre-crisis, during and post-crisis. Belonging to a developing country, I firmly believe that documenting how different segments of a society, both private and public, come together to collectively safeguard the entire populace regardless of race, cast, and religion, in a developed country, is important. It is important because part of a developing country’s aspirations can and should be built around examples such as these, where infrastructure works together with public/private institutions like clockwork. 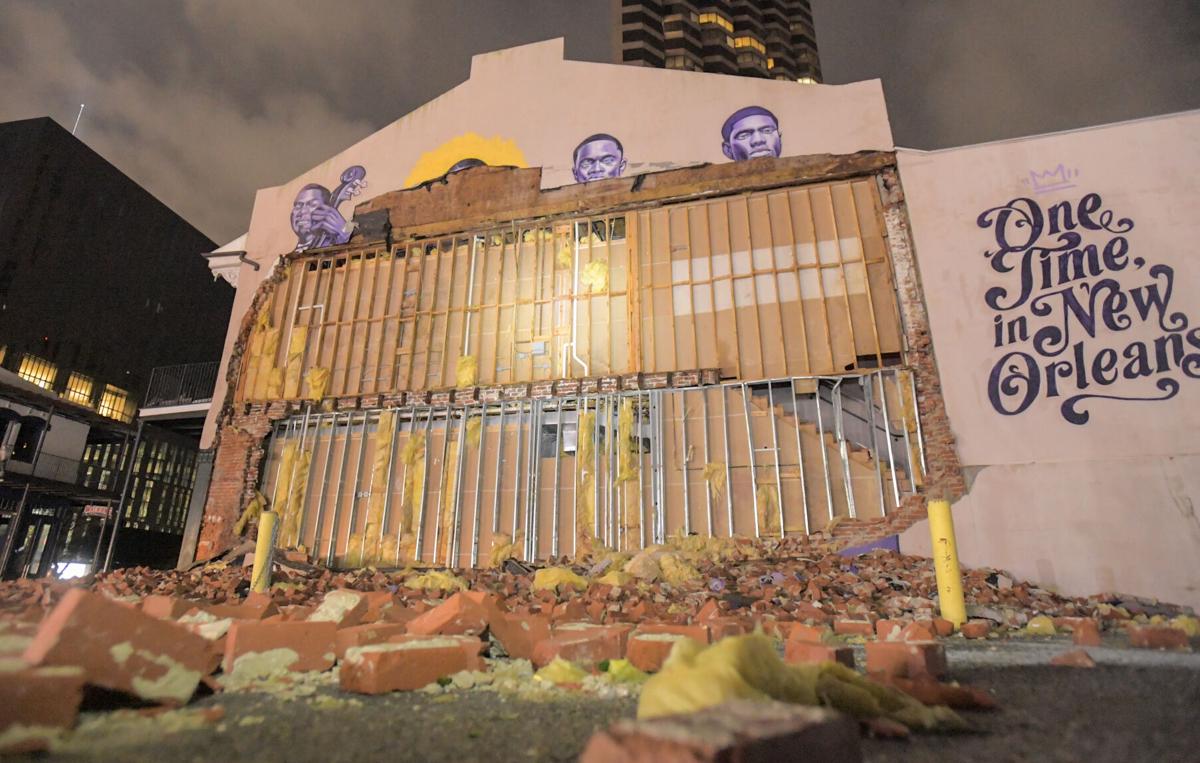 The image shows a destroyed mural. The image has been sourced from Google.

Let us start with two days before the storm/hurricane was expected to hit the city. There is an Instagram page, #NOLAready, which provides consistent updates regarding weather, safety, resources and pretty much everything else about the city that residents may need to know. Through that page residents can also signup for updates via text messages which are super helpful especially in the unforeseen circumstance of losing internet service. Two days before the storm was supposed to hit, #NOLAready was relaying messages advising on how to protect life and property from the storm, where to park cars, what supplies to gather for emergencies along with regular updates on the weather. The city announced that residents can pick up free sandbags from select locations to stop rain water from flooding homes and entering through the doors etc. Given that the storm turned into a CAT 3 hurricane swiftly, the mayor ordered a mandatory evacuation in areas that were not under the levee protection and thus could be severely affected by the storm. In addition to that, the city mayor announced that the rest of New Orleans is under voluntary evacuation making it clear that there is a greater possibility that the storm would be horrific and those who fear their homes might flood should evacuate immediately, the sooner the better. They also alerted residents to the possibility that roads might get blocked by traffic as several people try to leave the city ahead of the storm and they should plan accordingly. This was on Friday, two days before Ida was expected to make landfall. The city government also announced that neutral ground parking is allowed as long as parking does not block the roadways, streetcar tracks or intersections. 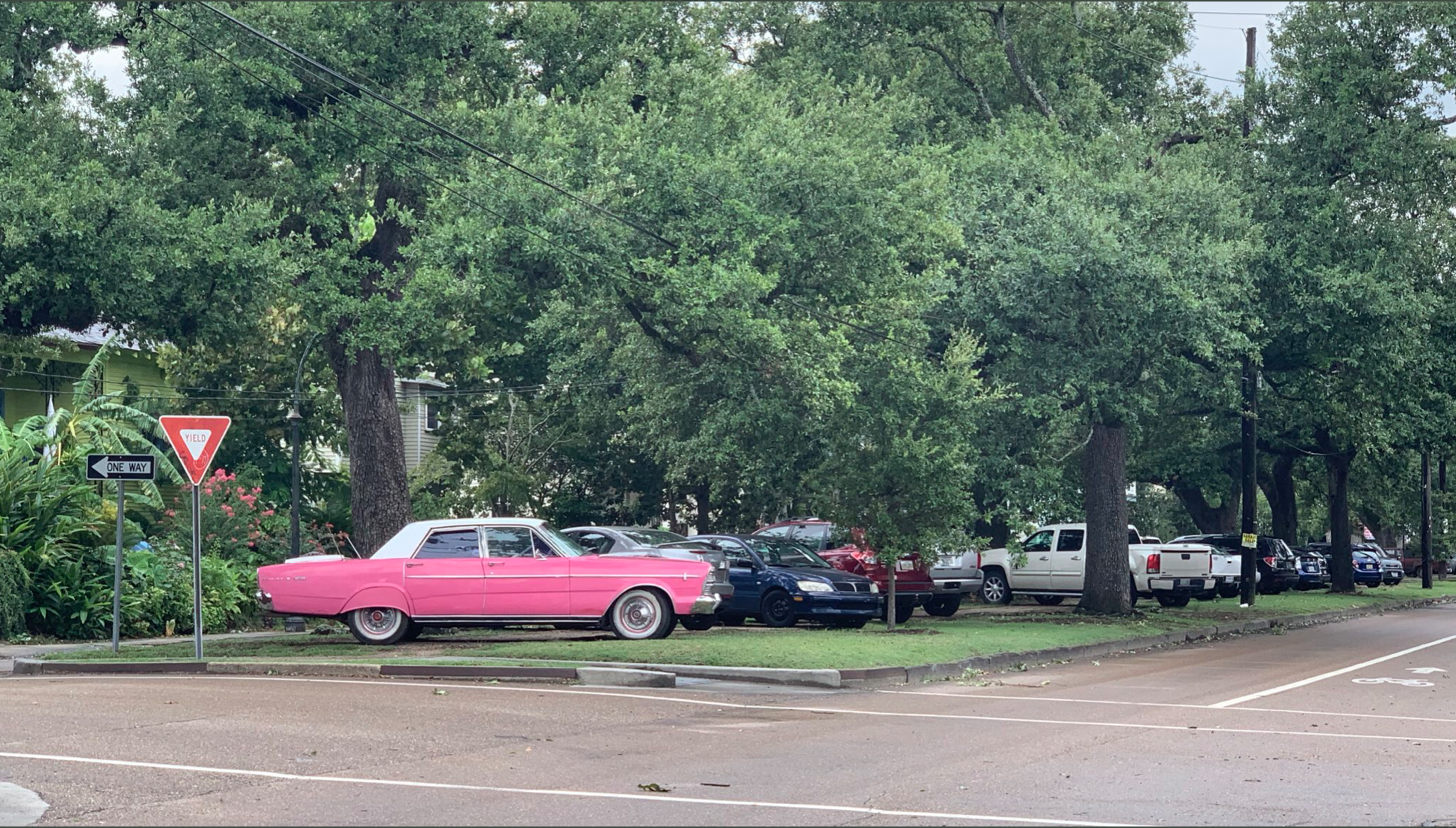 The image show car parked on neutral ground in NOLA ahead of the storm. The image has been sourced from Google.

Because there were strong expectations of power outages, what really touched my heart was the fact that the city informed the residents about a “special needs registry” and encouraged them to sign up if they are themselves dependent on a constant source of power for medical needs. The special needs registry enabled the government to help move people who signed-up for help, to secure locations. A helpline by the name of LAShelter aided people who not only needed to evacuate but also needed shelter after evacuation and had no other option. Similarly, a free parent-infant helpline was also set up to aid (medical or otherwise) parents of infants. Isn’t that incredible! 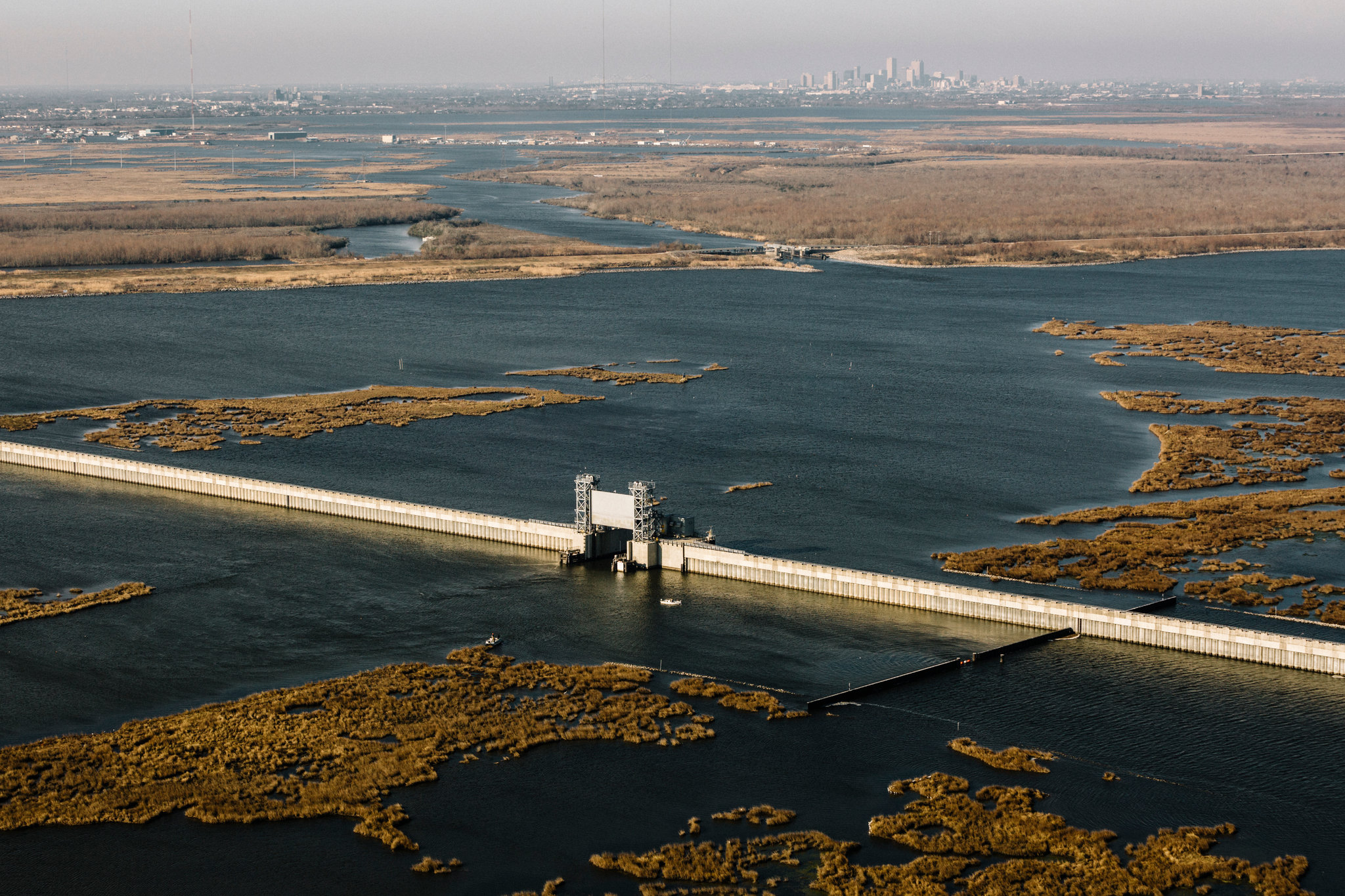 This is a storm surge barrier located near New Orleans. The image has been sourced from the The New York Times.

At the same time, while #NOLAready was making people aware of all the resources that they could avail, the city government was keeping the residents updated about what the city is doing to ensure smooth functioning of the city during the hurricane. To that effect, they informed that the Sewage and Water Board is pumping water out of the city’s canals to prepare for heavy rainfall and expected flooding from Ida. Similarly, the flood protection authority closed the flood gates of the federal levee system to prevent storm surge in NOLA (New Orleans Louisiana) ahead of the storm.

On Saturday, a day before the storm, shelter-in-place mandates were issued for all of NOLA and emergency communication specialists were live at 3-1-1 for assisting residents through any trauma and suffering as the storm blew through the state. Public safety, infrastructure and human services gathered at the emergency operations center in NOLA to work together as the hurricane, which was now a CAT 4, made landfall in New Orleans at around 11 AM on Sunday morning, way closer than originally anticipated. Wide-spread power outage warnings were issued as the storm ravaged through the city causing the sewage and water board to issue “limited use” warnings to avoid the sewage from choking. 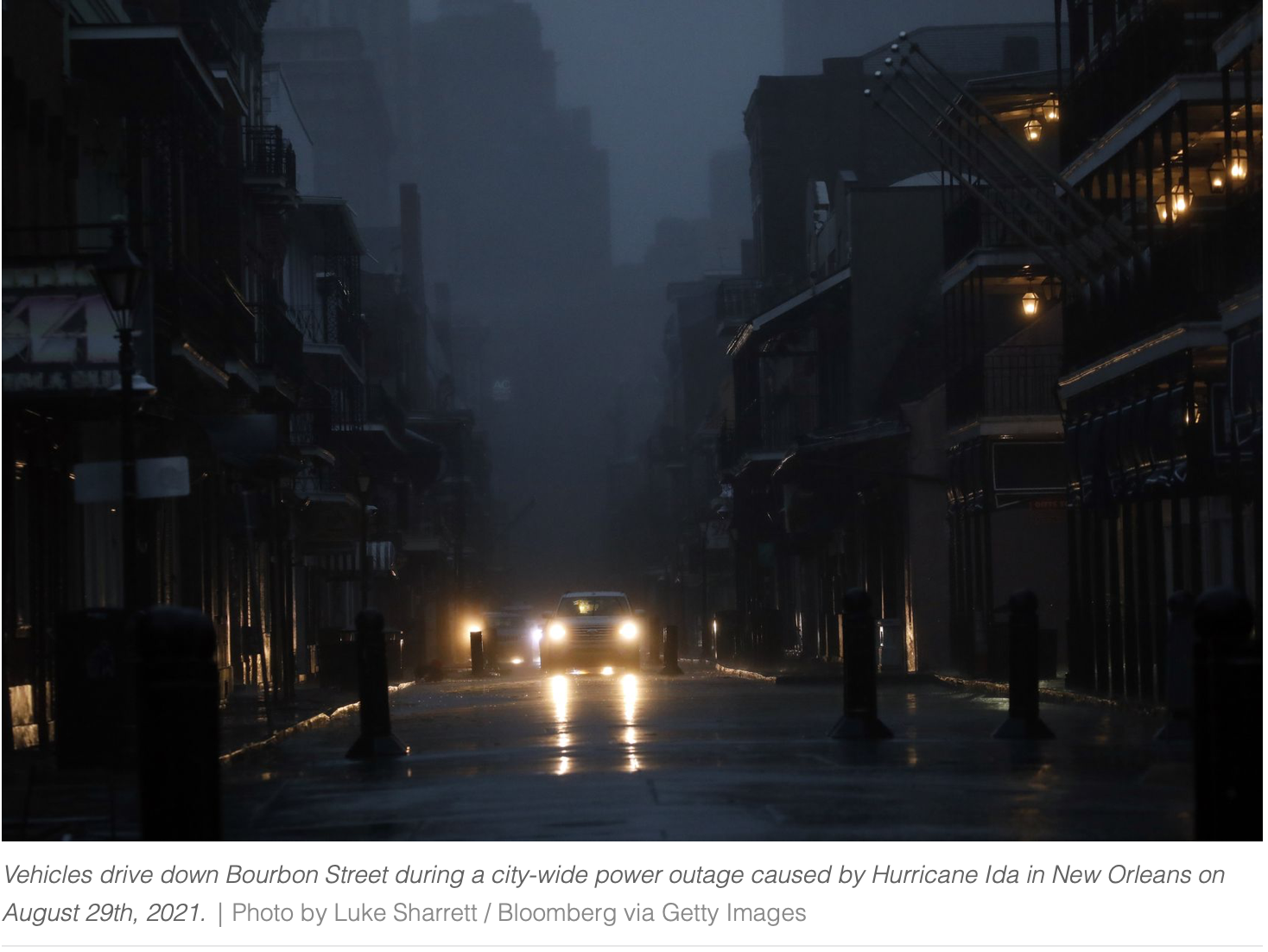 Soon after midday, all of NOLA was under a complete black out – all Entergy power was lost as the transmitter lines fell into the Mississippi river. The city issued notices that their teams are working quickly to make up for this loss of power and are currently relying on turbines and backup generators. As the hurricane teared through the land, cell phone carriers lost network and thus made 911 inaccessible. Given that the emergency number was inactive, the city government launched a new emergency number. Since 911 was experiencing technical difficulties, all fire stations were put on alert to respond while a new helpline was made available for emergencies. Residents were able to dial this number from their phones even without cell service. The residents were informed that the Sewerage and Water board continues to operate on self-generated power to drain storm water from the city and pump in drinking water. Towards the end of the hurricane, despite there being no power whatsoever, the city government started assessing roads for debris and updated a map so that residents can be aware of which roads are blocked, in case they were planning to evacuate. 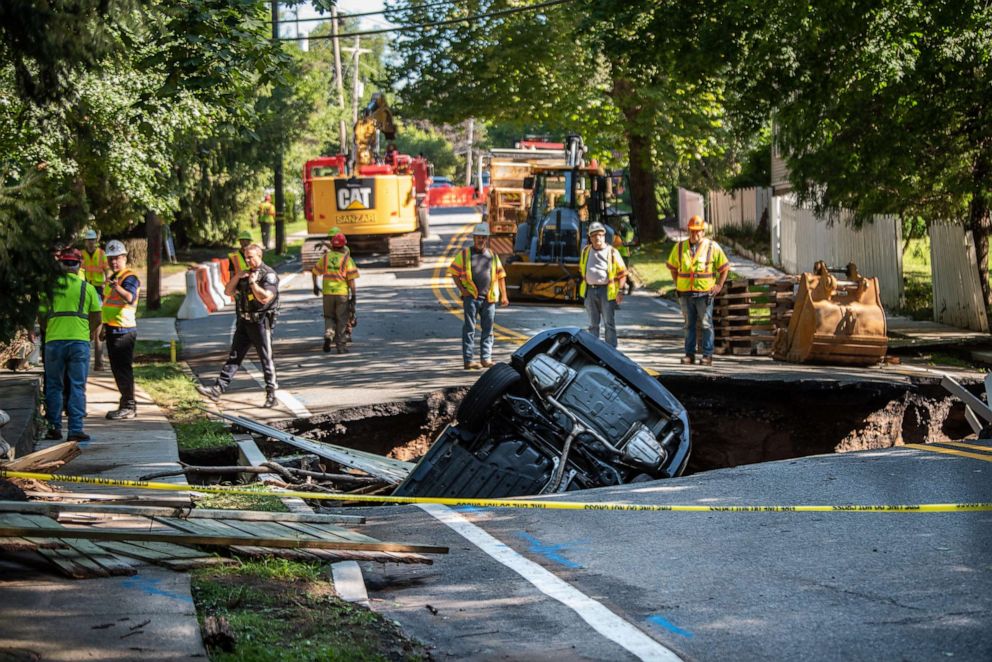 Workers gather around a portion of county road in Demarest, N.J., that collapsed during Tropical. The image has been sourced from USA Today Network

Sheets of rain continued to fall the entire night all the way to the morning. And in all my years of living, I have never witnessed a night so dark. I am up on the eighth floor of my building, and it was eerie to look down and see only a couple of car lights but nothing else. No building in sight had even a single lit window, truly apocalyptic. Then came Monday, one day post hurricane, and as shocking as it might be to believe, the city was still without power. Despite that, here are the measures the city government took to transition back to sanity: 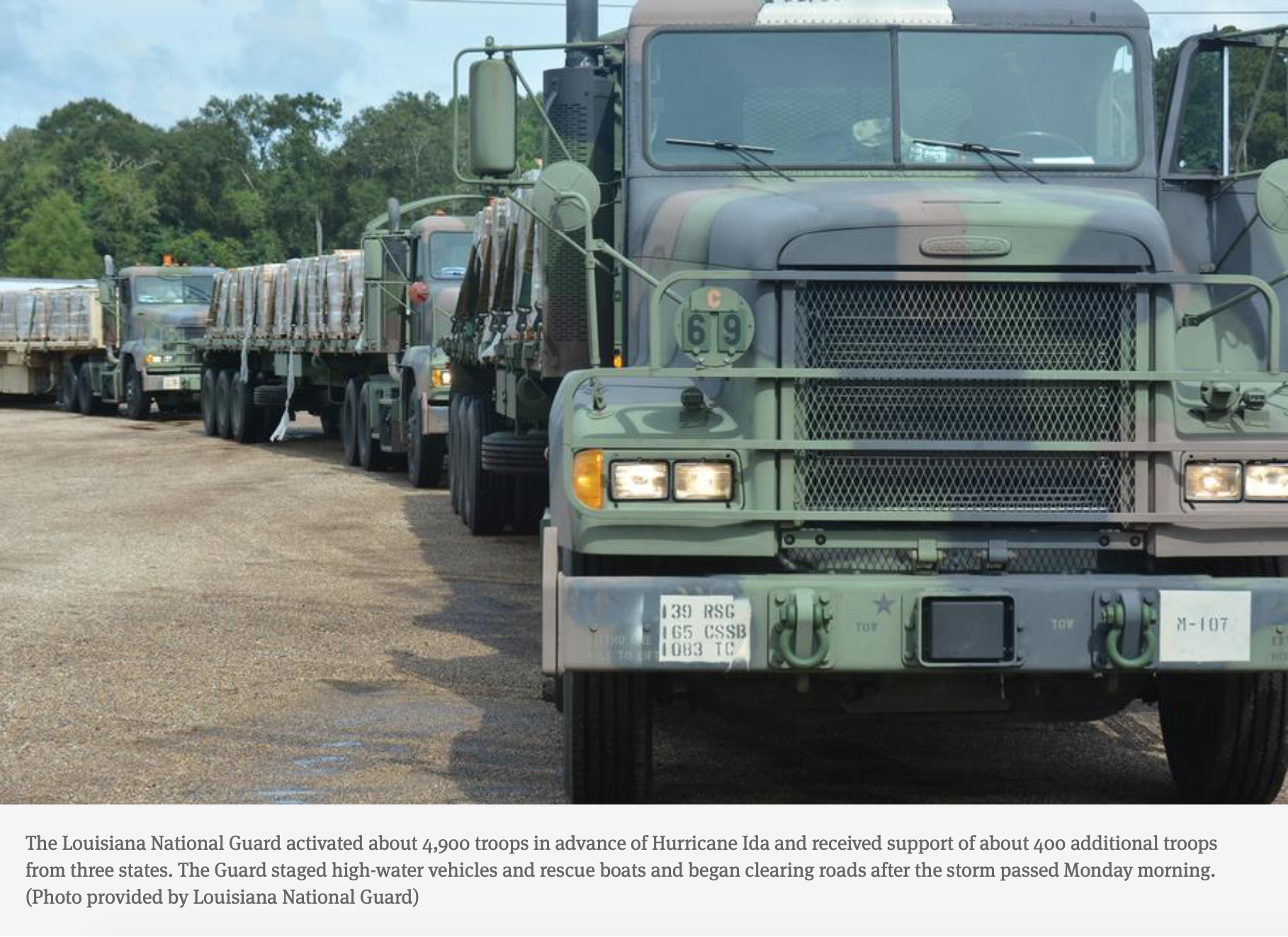 The actions I have listen above form a small part of the work that the government was doing to ensure that the city and its people are back on their feet again. It was no small task to recover from a hurricane of this magnitude and the city government would not have been able to do it if volunteers, the residents themselves, had not participated. It was an all-out effort where literally every segment of the society was playing its role be it people, public/private institutions or the city government.

It would be unfair for me to not mention how Tulane, my university, played its role, the primary aim of which was to ensure the safety of its student population, faculty, general administrative body, staff, medical workers, and other professionals. From the day the hurricane was announced up until today, as I write this, Tulane has been one step ahead. It is incredible but I can say with one hundred percent confidence that as devastating as this hurricane was, there wasn’t one single moment where I felt alone, abandoned, helpless or unsafe. The credit for this goes to the brilliant leadership of the university under President Fitts, and the constant outreach via email by not just my department chair Dr. Douglas, my advisor Dr. Edwards, but also the President, the dean of graduate studies, the office of international students, the president of the graduate studies student association (GSSA, of which I am a representing member) amongst others (the school of public health and the school of medicine predominantly).

So, what did Tulane do precisely? Here is a comprehensive list which still does not cover everything:

As I mentioned, the news about the severity of the storm was communicated through support emails from advisors, department chairs, GSSA, OISS, Dean and the President. All students were being instructed from at least three days prior to the landfall of Ida to stock up on supplies for a minimum of three days, charge all devices, fill up water containers, account for perishable food enough to last some days, and keep battery run lights handy. 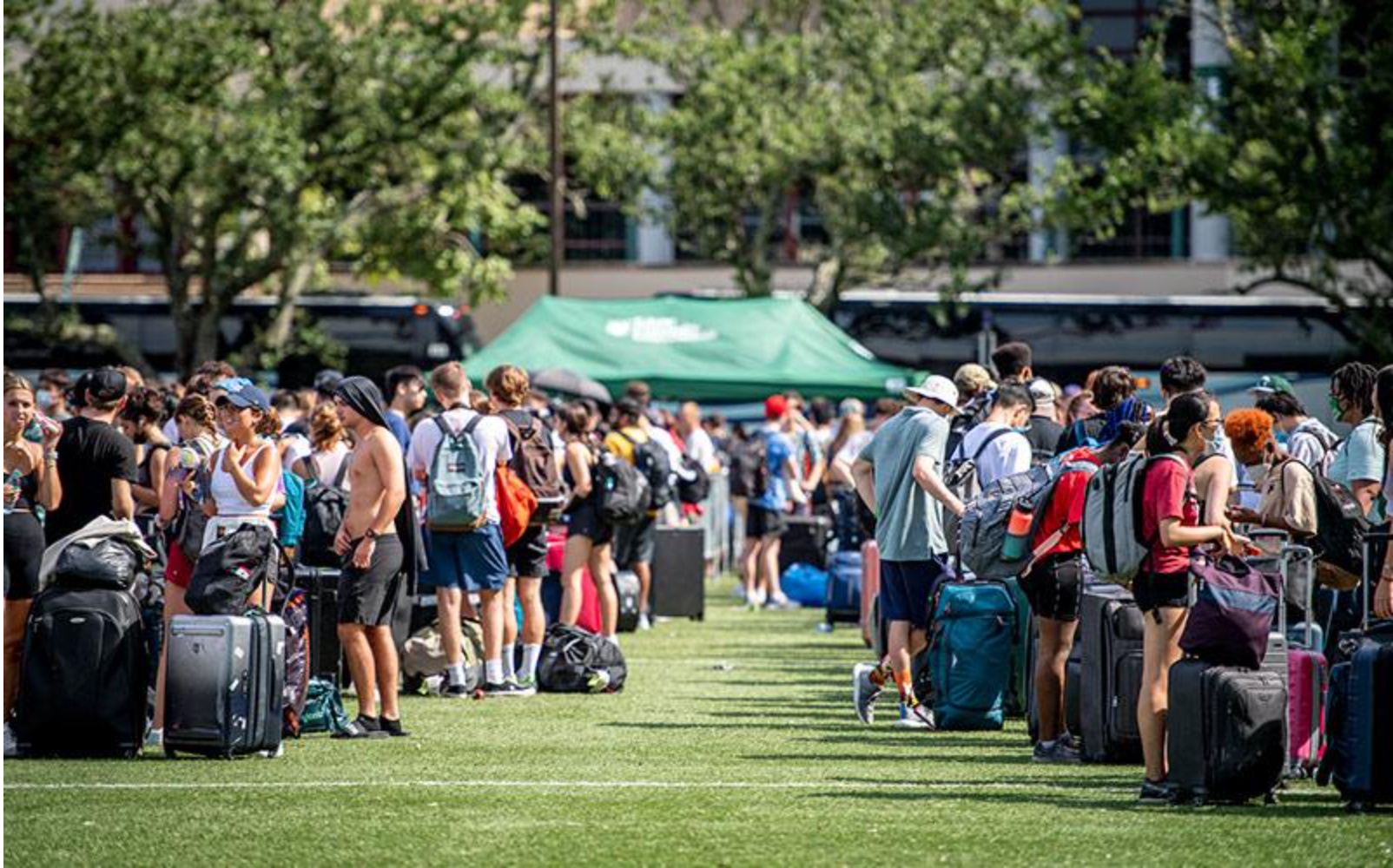 The image shows students gather in Brown Field at Tulane for evacuation to Houston. Image sourced from Tulane’s official website. 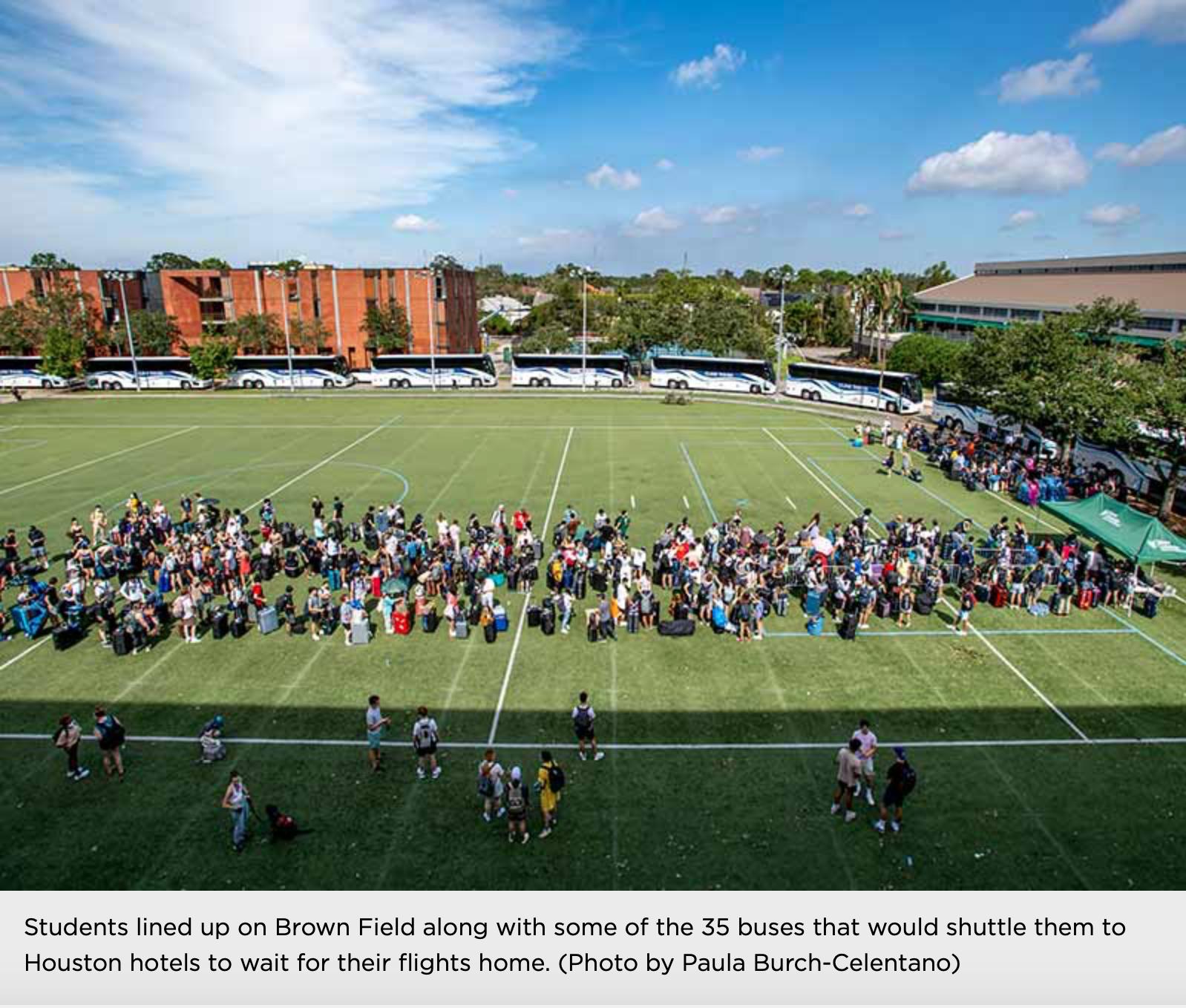 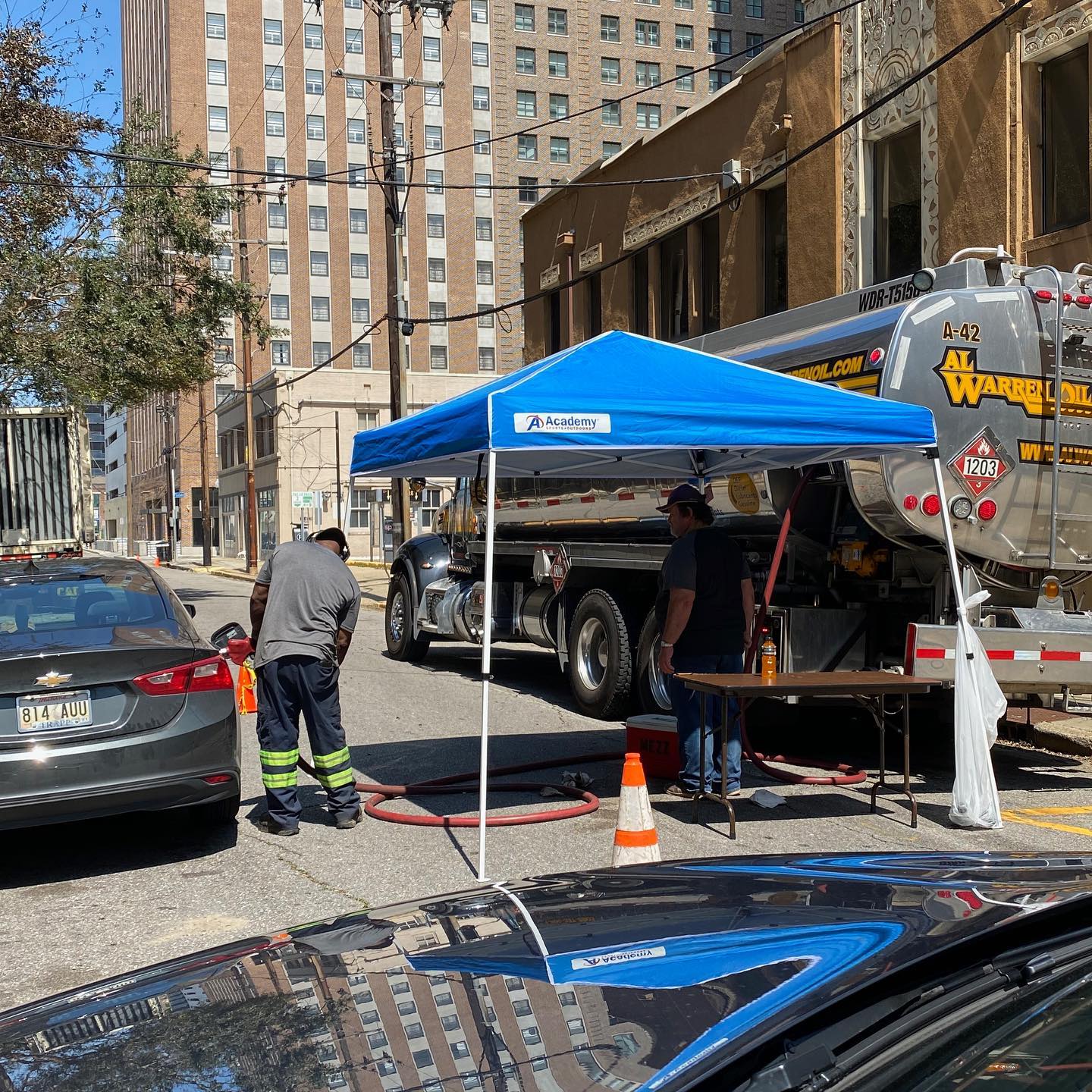 Fuel has been hard to come by since #HurricaneIda and nearly impossible to find if you’re one of the faculty, fellows, residents, students and staff working around the clock at the hospitals and School of Medicine buildings. So Tulane Medical Center brought the gas truck to them. Image sourced from FB page of Tulane School of Medicine. 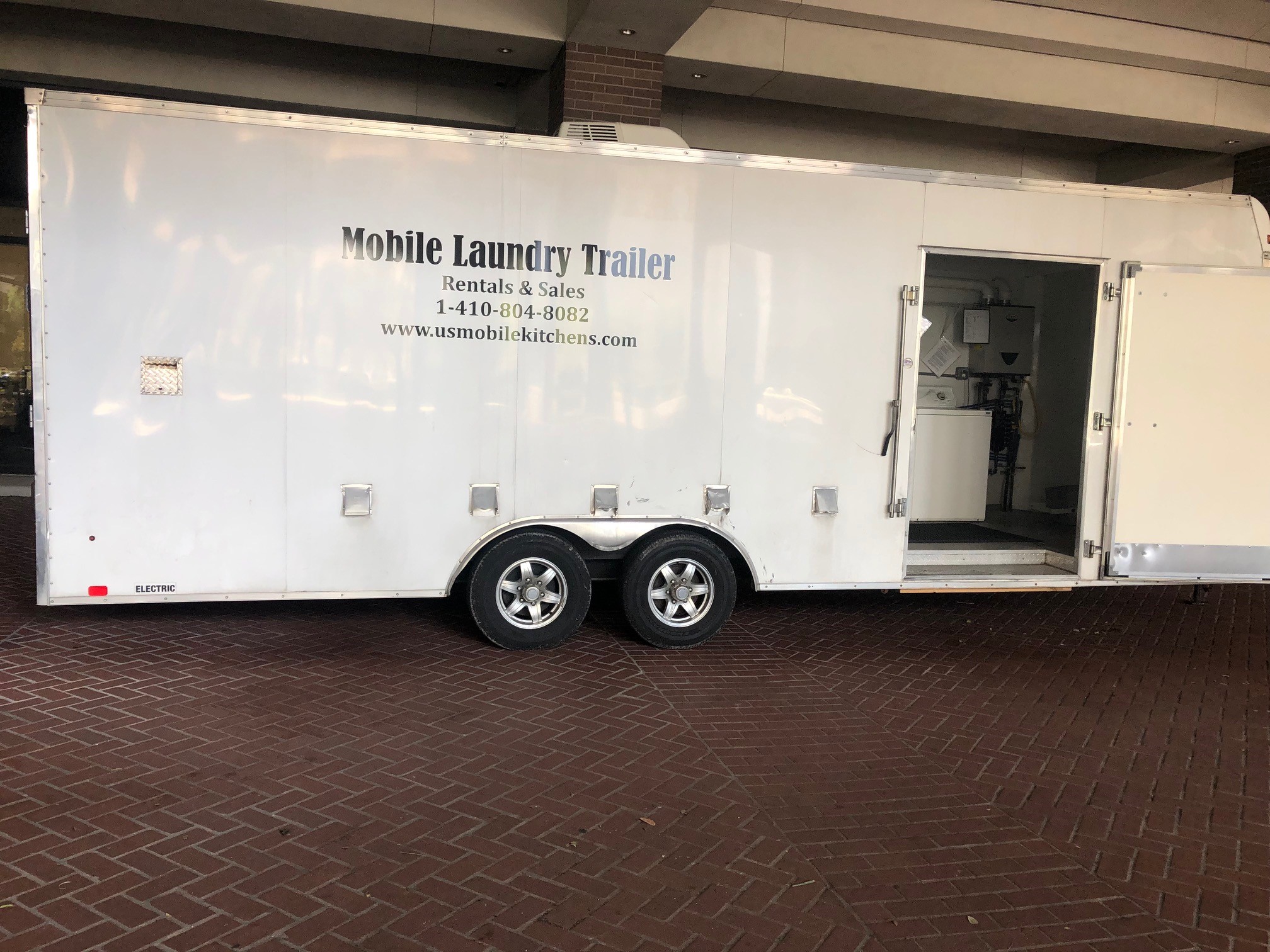 Basic needs like clean clothes are difficult to accomplish when your home is without power or water. That’s why Tulane has mobile laundry trailers for employees to wash and dry their clothes while they work! Image sourced from the FB page of Tulane School of Medicine.

We go back to school from September 13th, 2021, online for the following ten days as repairs continue on campus and power is restored city wide. But I must say this has been an experience of a lifetime, and not just in terms of riding out a hurricane. 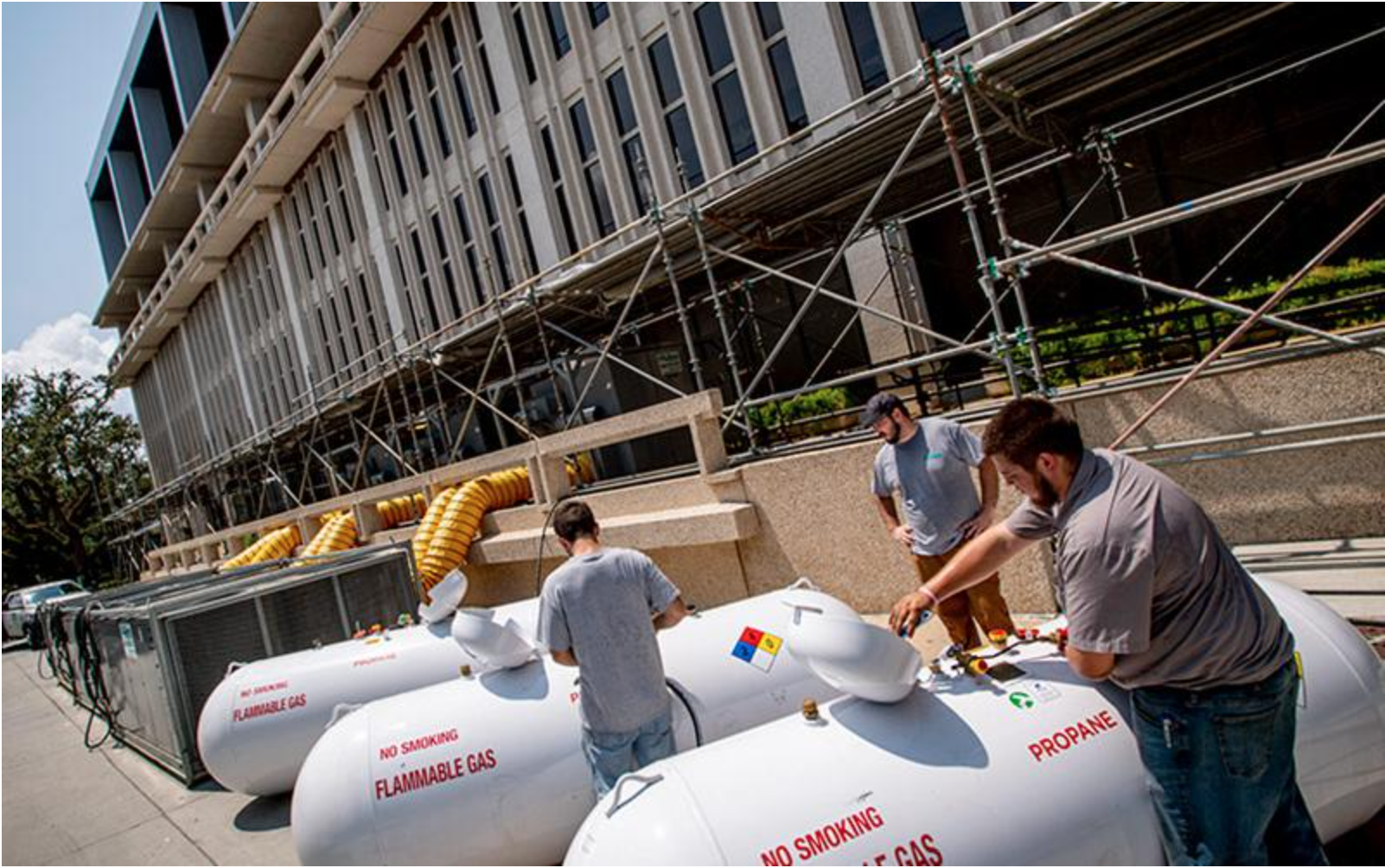 The image shows busy workers in front of the Howard Tilton Memorial Library at Tulane’s uptown campus. These workers form the team that is assessing damage and repairs at campus post Ida to ensure students return to a completely safe environment. Image has been sourced from Tulane’s official website.

This hurricane has been devastating for a lot of people and families especially those for whom entire lives have been washed away through loss of life and property. But it could have been a lot worse, as it is in unequipped developing countries which are crippled by natural disasters. And so, in writing this I hope that my brief account of what happened and more importantly, how it was handled, provokes some thought where it matters.